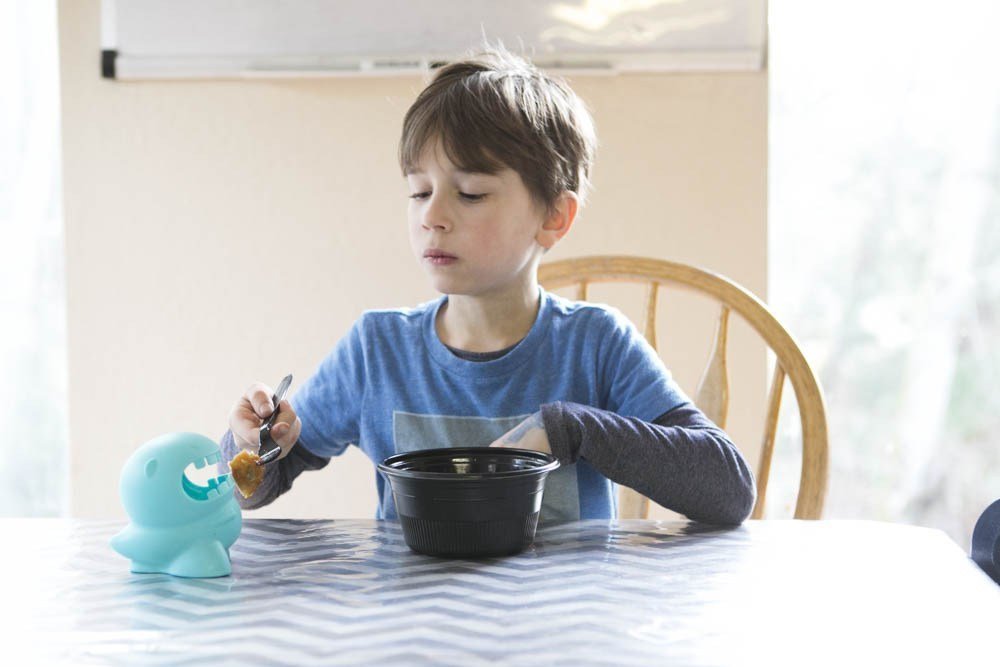 I received Milton the Mealtime Companion in exchange for a review. I received no other compensation for this post. Post contains affiliate links.

My six-year-old son, Apollo, had a g-tube placed in his stomach when he was just 22 months old. He was born with a rare heart defect,  a double aortic arch. Apollo had compression on his esophagus which made it very difficult for him to eat. He struggled with eating until he was five years old. It took years of feeding therapy, surgeries, trial and error, and over a year of visiting the feeding clinic at Seattle Children’s Hospital before he was able to eat entirely by mouth.

I am happy to say at age 6 1/2 Apollo had his g-tube removed and became a full-fledged eater! He is still picky and some days are still really hard, but he now eats 100% of his food orally.

What exactly is Milton the Mealtime Companion?

Here is what the two dads who designed him said:

“Milton is great for encouraging new foods, learning about healthy eating, teaching table manners, demonstrating safe eating, having fun meals with your little one and so much more!”

Milton was designed with the help of a pediatric feeding specialist who understands the complicated issues of children who struggle to eat. The Meals With Milton site is full of resources to help you navigate difficult eating situations.

Apollo fell in love with Milton as soon as he saw him. He is soft, cute and strangely appealing. I read the accompanying book with Apollo and then we invited Milton to our next meal.

Through his story, Milton helps kids become comfortable with the idea of new foods. If a child doesn’t like a food (or is afraid to try a food) he can give a bite to Milton first (or instead). Apollo took to Milton right away and loves having him at the table with him.

When Apollo was in feeding therapy each child was given a small cup with fish on it and told to “feed the fish” if they needed to spit something out. Milton is a great alternative to this. Apollo choked on foods for years due to the compression on his esophagus and we had to teach him how to appropriately spit out foods.

I wish we would have had Milton during the years when Apollo was only able to eat a few bites of food at a time. Being able to feed Milton would have given him a chance to participate more fully in family meals.

Milton the Mealtime Companion Can Help With Oral Hygiene

Many children with oral aversions and feeding issues struggle to brush their teeth. This has always been an issue with Apollo and Milton gives him the opportunity to brush Milton’s teeth. All of these activities desensitize Apollo and help him work through some of his fears.

By the way, we now use this autism toothbrush which has make tooth brushing so much easier!

And like many kids with feeding issues, Apollo hates getting sticky. He will often avoid sticky foods because he hates the feeling so much. Apollo loves reading about how Milton solved this problem.

In short, Milton is a great way to teach kids about manners, trying new foods and oral hygiene.

You can order from Milton from Amazon or directly from the Meals With Milton.

I honestly think Milton the Mealtime Companion would be great for any toddler or preschooler but especially for picky eaters or kids with genuine feeding issues.